This chapter explains the characteristics of the main OSR technologies and summarizes the current knowledge on the potential environmental impacts of the various OSR options to an oil spill in the Arctic region.  The focus is on the impact of an at-sea response (as opposed to shoreline clean-up) to support the NEBA process.  The response techniques discussed are: natural attenuation, mechanical recovery and containment, in-situ burning (ISB, with and without the use of herders), and physical and chemical dispersion.   The equipment and strategies used for these techniques have been reviewed in detail in a recent publication (Potter et al. 2012).  Strategies and techniques for recovering and remediating oil in ice have been extensively studied over the past 45 years (Dickins 2004). Two oil spill research projects conducted in the Canadian Beaufort Sea from 1974 to 1981 contributed to the acceptance of in-situ burning as a primary response strategy to deal with spills in ice (Norcor 1975; Dickins and Buist 1981).  Examples of previous field experimental studies and accomplishments are presented in Table 1-3 (next page).  Of note, is a recent program, oil spill contingency for Arctic and ice-covered waters (JIP on Oil in Ice; Sorstrom et al. 2010) conducted several large scale field experiments assessing the complex interactions of oil, water, and ice with state of the art data collection techniques (Photo 4-5). 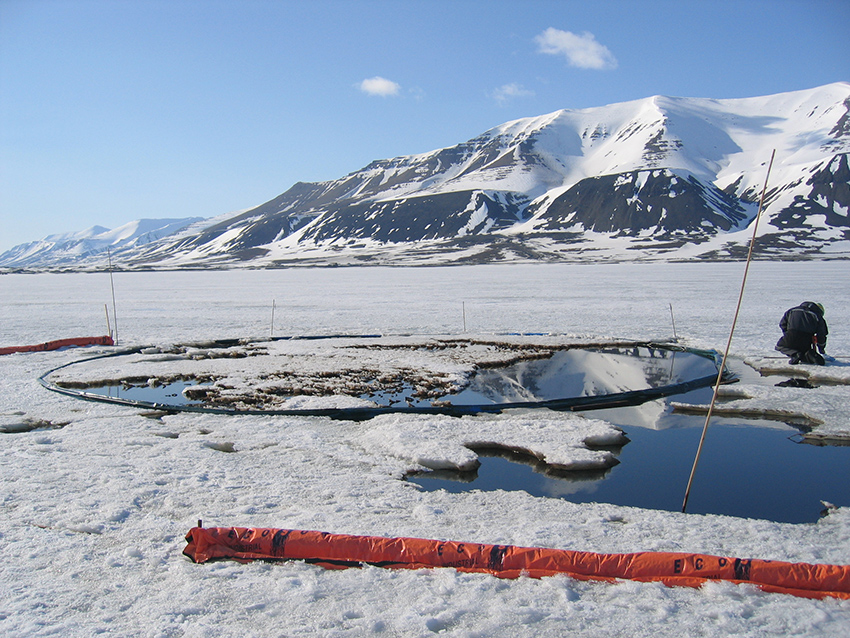 This review focuses on the effectiveness and associated environmental impacts of these response options when deployed under a variety of Arctic conditions and identifies areas for future research.  Special attention is paid to how responses in the Arctic may differ from non-Arctic areas of the world. Increasing collections of experience and data will provide a broader foundation for spill response decisions and help to reduce the overall environmental consequences of a spill.

These documents were categorized into:

In general, the majority of the reviewed documents dealt with the feasibility of the response options under various conditions and the methods that were used or tested to optimize the efficiency of response techniques.  It is noted that very few papers focus on a comparison of effects between different environmental compartments as a result of the response action while this is one of the main challenges in NEBA.  Next to the potential impacts of oil and oil residues, NEBA should also look into the impacts of the response action itself, which may include access to vulnerable areas and impacts related to logistics.

4.1.1 Environmental Uniqueness of the Arctic Region in Relation to OSR

The Arctic region is characterized by the presence or absence of ice at different times of the year which generates a seasonal regime of ice coverage and ice thickness (AMAP 2007, SL Ross 2012b, Wang et al. 1999).  When spilled, the oil fate and behavior will depend on a combination of the ice growth stage and coverage area which together can reduce or stop the weathering processes and limit the spreading.  In some cases, the oil can be trapped by the ice and remain fresh and unweathered until the melting season.

The extent and nature of ice coverage also greatly affects the OSR options that might be considered and their operational effectiveness (SL Ross 2011).  While shorelines and lagoons are not unique to the Arctic these are critical environmental compartments that have seasonal congregations of valuable ecosystem components that create significant risks to populations (refer to Sections 2, 7 and 8).  The importance of these seasonally used compartments and the logistical challenges of positioning manpower and equipment at remote locations that ultimately limit response feasibility and/or timing suggest that response options need to be selected to avoid contact with these environmental compartments during those seasonal uses (refer to Sections 7, 8 and 9).  Surface or subsurface oil releases will be influenced by the presence of ice (refer to Section 3) and will impact both environmental compartments and key species groups differently depending on location and density of the ice cover and seasonal use of those environmental compartments by VECs (refer to Section 2).   Depending on the season of the year and the site of released oil, an incident may result in different types or magnitudes of environmental impacts.  Generally speaking, “Arctic habitats are characterized by extreme seasonal change, which drives extensive migrations on land and at sea. The seasonal patterns of movement to, from, and within the Arctic determine to a large extent the vulnerability of Arctic ecosystems to oil spills. These patterns of seasonal activity and movement must be taken into account in selecting response strategies designed to reduce or avoid environmental impacts from oil and gas activities” (AMAP 2007).

Arctic species are subject to potentially dense concentrations (e.g. for birds, mammals, and fish) according to migrations patterns and corresponding ice regime.  Ice edges are important locations for concentrating marine mammals and birds as a result of high biological activity. In addition, possibly due to the low ambient temperature, there is a low turnover for many species and consequently population recovery can be slow.  As an example, some Arctic fish spawn under ice in winter; their eggs incubate under ice and hatch when ice begins to melt and plankton blooms occur.  An oil spill in such spawning areas and during early life stages could severely reduce that year’s recruitment (AMAP 2007).  The presence and the movements of the different species in both localized and regional areas is generally not  known to the extent needed to make some of the important tradeoff decisions when selecting spill response options.  Baseline studies are often conducted as part of the Environmental Impact Assessment (EIA) process that is undertaken in areas where oil and gas production is envisaged or in the process of being developed. Mapping (spatial and temporal) the ecological vulnerability of Arctic habitats in these areas will contribute significantly to regional oil spill response planning.