The in-situ burning (ISB), also referred to as controlled burning, has been the subject of extensive research, development, and testing over the past 30 years in temperate and sub-arctic water (Potter et al. 2012).  The basic premise for effective and efficient burns is to collect and/or concentrate the oil slick to a thickness greater than 2 mm and provide an ignition source that can start the burning of surfaced oil.  The oil must not be weathered or emulsified to such an extent that there are not enough lower molecular weight compounds (LMW) and available oil to sustain combustion (Fingas and Punt 2000). 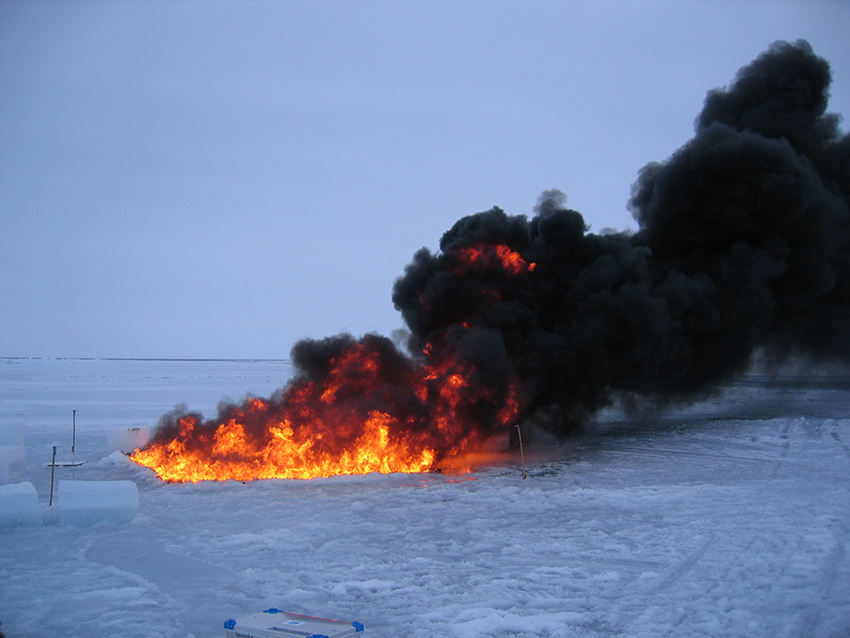 ISB can be effective in rapidly removing large quantities of oil from the marine environment. Ideally, about 85 to 95% of the burned oil becomes carbon dioxide and water. The rest, 5 to 15% which is not burned efficiently is converted into particulates (soot) and a few percent is converted into organic compounds and combustion products that remain in the marine environment (Potter et al. 2012). The burn residue from a typical efficient ISB operation is in the order of less than 15% (SL Ross 2010).  ISB seems well suited to Arctic conditions and the presence of ice (Photo 4-5). The presence of significant ice formations can keep  oil from reaching water (burning of oil on ice) or limit the spreading of the oil on water (burning thick patches of oil on water contained among ice formations).

In-situ burning is an efficient process that removes ~80% of the oil (SL Ross, 2010).  However, the residuals of these burns include unburned volatile materials that are released into the air, soot particles that are also mobilized and transported into the air, and the modification of oil compounds into new products or the addition of agents (e.g., herders) and their burn products for release into the air or water.  These residues of the burning process (smoke, volatiles, soot particles, additives and unburnt oil) are the potential materials that can pose environmental and human health effects.  In addition there is a small risk of causing secondary fires that could threaten human life, property and natural resources; this risk is, however, easily manageable.

Chemical herding agents are products used for thickening an oil slick and concentrating oil on the water surface in order to reverse the effects of spreading.  The increase in thickness may facilitate oil combustion during an in-situ burning operation.  Several herding agents are listed on the National Contingency Plan registry as approved for use during oil spills, including Thickslick 6535 and Siltech OP-40.  A third herder employed by the US Navy (USN herder) has been tested under arctic conditions.  The USN herders (65% Span-20 and 35% 2-ethyl 1-butanol) and silicon based herders have been used under Arctic conditions and have been shown to work in cold open water environments as well as in broken ice (Buist and Nedwed 2011).

Generally an efficient burn leaves 5 to 15% of the initial oil as residual or unburnt oil (SL Ross 2010).  The residual is mainly composed of high molecular weight (HMW) oil compounds which are similar to those in highly weathered heavy fuel oil.  The physical properties of burn residues depend on burn efficiency and type of oil.  Factors that determine whether residues float or will sink are:  water density, oil chemical properties, thickness of slick, and efficiency of the burn (Buist and Trudel 1995).  The residual ash may also settle on the surface of the surrounding ice or sea where it may come into contact with surface dwelling organisms.

Tests have been carried out on the burn residue of Alberta Sweet Mixed Blend which had been used in the Newfoundland Offshore Burn Experiment (NOBE).  The water accommodated fraction (WAF) was prepared from the unburnt residue and tested on rainbow trout to assess the 96 h LC50 and on sea urchin for inhibition of fertilization (20 min contact). The maximum total petroleum hydrocarbon (TPH) concentration measured in the test solutions (WAF) was 1.1 mg/L.  All samples were not toxic to the tested species (Blenkinsopp et al. 1997).  In another study, Daykin et al. (1994) concluded the toxicity of the residue should be lower than that of the initial oil.  Other studies showed that the residue had very little or no acute toxicity to key indicator species in salt water and freshwater because an effective burn removes the lightest, most toxic components of crude oil (Blenkinsopp et al. 1997).

In a recent study by Faksness et al. (2010), the semi-volatile organic compounds (SVOCs) in a crude oil prior to and after ISB were analyzed.  No volatile analyses were performed, but a removal of approximately 60% of the SVOCs, mainly the decalines and naphthalenes, had occurred during the ISB. Acute toxicity tests with the marine copepod Calanus finmarchicus exposed to the underlying water after ISB indicated no increase in toxicity when compared to WAF generated with unburned weathered oil. These findings were in accordance with the results presented by Daykin et al. (1994) as a part of NOBE.  Concerning potential for exposures to the PAHs in burned oil residue, several studies have demonstrated that the concentrations of PAHs in the residue were lower than that in the initial oil.

While the toxicity from uptake of chemical components of the residue does not appear to be a concern to water column organisms, there is possible impact on surface dwelling species (by ingestion and/or direct smothering) and benthic species if the residues were to be stranded onshore or sink onto the sea bed. These risks are however considerably lower than when fresh oil remains on the surface or strands.  Concern for such an impact arose during oil spill incidents involving ISB, e.g. the Honan Jade spill in South Korea (1983) and the Haven spill in Italy (1991) where the NRC (2005) reported that the burn residue was typically a semisolid, tar-like layer.  The surface oils were burnt, removing the impacts in the surface waters but the burnt residues would sink where they affected the benthos.  Such sinking residues consisted of scattered chunks rather than as a continuous mat covering a broad area.   While this type of impact on the benthos is very hard to assess it must be considered as part of an overall assessment of potential benefits and impacts of ISB.

Oil combustion produces gas, smoke and soot into the atmosphere.  Typically the smoke plume is composed of CO2, steam, soot, CO, SO2, NO2 and VOCs including PAH and BTEX, dioxins and dibenzofuran (Tennyson 1994, Fingas et al. 1993).  Despite the fact that VOC concentrations in the plume are usually lower than the accepted threshold value for human health concerns (Buist et al. 1999), responders put an exclusion zone in place to ensure there is limited exposure of downwind communities or wildlife populations to these compounds.  Responders are also excluded from the immediate area of the fire and at more lengthy distances downwind of the fire.

In one assessment of the NOBE study Ross et al. (1996) found that burning of 1 Kg of oil produced 40 µg of PAH in the soot/particles while the original oil had 9.5 g/kg of oil.  Therefore multiple authors have concluded the ISB residue would have a lower toxicity than the initial oil (Buist et al. 1999, Fraser et al. 1993, Garrett et al. 2000, Li et al. 1992, Lin et al. 2005).  The potential effects that would occur with species living at the air/water interface or that break through the surface (e.g. seabirds and marine mammals) were unaddressed by these studies.

The production of smoke during an ISB, and the concentrations of smoke particles at ground or sea levels are usually of most concern to the public as they are highly visible from significant distances and can persist for several miles downwind of a burn.  Concerns include human health and wildlife inhalation risks from particulates carried in the smoke plume.  Particulate concentrations in the plume are greatest at the burn site, but they decline with increasing distance from the site, primarily through dilution, dispersion, and fallout, but also through washing out by rain and snow (API 2004). The species of greatest concern to atmospheric pollution or fallout of soot and particles will be downstream of the burn and include marine mammals that must breathe at the surface of the sea or species and life stages that live within the very surface of the water.

The literature dealing with herders is rather old as these products have not been considered or promoted until very recently.  Available data shows that most chemical herding agents are not soluble either in water or in oil (less than 1%; Hayward et al. 1995, MSRC 1993) and are used at low application rates; therefore, acute toxicity of these products to pelagic organisms is generally not considered to be an issue.  Additional considerations may be required under special use conditions such as very shallow waters with low flushing rates and organisms abundant in early life stages, but exposures are still likely to be at very low concentrations (Walker et al. 1999, MSRC 1993). The more recent documents deal with the efficiency or operations related to herder use (SL Ross 2010).  As with dispersants, the toxicity information is limited to water column organisms and there is little information available on the toxicity of these materials to surface dwelling organisms.

Most of the available information on ISB deals with the efficiency of the technique and operational guidance.  While there is some information regarding monitoring activities to ensure air pollution is not a human health or wildlife exposure issue, information on the environmental impact is more limited.  Information on fate and effects studies could be compiled, taking into account the specificity of Arctic environment (species with the possibility of large concentrations of juvenile life stages, especially within the surface microlayer) and additional studies could be conducted to evaluate the persistence of these products and their residues where necessary.