Approximately 56 studies have been conducted with crude oil.  There have been a number of different oil types included in the different testing programs, as well as different types of preparations with untreated (soluble fraction or physically dispersed) or treated oil (chemical dispersant or ISB). Peer-reviewed studies with photochemically enhanced toxicity (photooxidation) with Arctic species are not available. However, photoenhanced toxicity of physically and chemically dispersed Alaska North Slope crude oil has been evaluated with Pacific herring eggs and larvae (Clupea pallasi; Barron et al. 2003).

Exposure systems vary between studies although there is an increasing trend to harmonize the approaches between laboratories.  Studies have been conducted as continuous or declining exposures, with WAF, dispersed WAF, or physical dispersions.  It is noteworthy that relatively few types of chemical dispersants have been used in toxicity studies, primarily Corexit®9500 and Dasic Slickgone. The vast majority of the exposures were waterborne and five studies were diet borne exposures.

Relatively few studies have included weathered oil.  There are some studies (e.g. Hansen et al. (in prep) have tested weathered and unweathered oil with the copepod C. finmarchicus. Given that OSR response times may be delayed in the Arctic due to the potential distances and inclement weather, this should be a future focus of study.

Single PAH toxicity data are an important component in developing predictive models and for comparing effects between different OSR alternatives.  Most studies performed with single compounds included 2-methyl naphthalene, naphthalene, and pyrene.  Fewer studies have evaluated benzo(a)pyrene and phenanthrene and primarily when evaluating uptake and tissue residues.  The naphthalene compounds are often included in testing programs since they are predominant in the crude oil and are known to elicit most of the acute toxicity.  Pyrene and benzo(a)pyrene have been used as model compounds to study a specific biological mechanism (uptake rate, metabolism, enzyme induction).

An increasing number of research programs are being conducted with Arctic species exposed to chemically dispersed oil and physically dispersed oil. Such data allow for a direct comparison of two OSR alternatives and provides responders with information to determine whether chemical dispersants should be used on an oil spill in the Arctic.  For Arctic species this research has focused on calanoid copepods and fish larvae (e.g. Hansen et al. 2012; Gardiner et al. 2013).  An additional paper in preparation addressed the same issues with shallow water benthic species (Frantzen et al. 2013, in prep.). While only two chemical dispersants were used (Corexit®9500 and Dasic Slickgone) and three different exposure systems between laboratories were employed, the investigators concluded that the same concentration of chemically dispersed oil is not more toxic than physically dispersed oil.  These conclusions suggest that chemical dispersants do not increase the toxicity of oil.

Arctic species require a longer period of time to exhibit effects associated with petroleum exposures.  A number of researchers have noted that Arctic species of fish (B. saida) and copepods (C. glacialis and C. hyperboreus) require up to 12-days to show effects associated with acute exposures in either spiked or typical 96-hour continuous exposures (Chapman and Riddle 2005; Olsen et al. 2011, Gardiner et al. 2013; Hansen et al. 2013).  Many factors may affect the increased response time of Arctic species to oil and treated oil.  Arctic species have a number of morphological and physiological adaptations to survive at cold temperatures (e.g. lipid stores, decreased metabolic rates for some larger body size compared to temperate counterparts, and slower digestion) that may affect toxic responses (DeHoop et al. 2011; Olsen et al. 2011).

Currently there are limited data regarding the toxicity of physically and chemically dispersed oil to Arctic species compared to the substantial body of data for sub-arctic, temperate, and tropical species.  Table 6-2 summarizes data from a subset of the available data reported for median lethal concentrations of oil and dispersed oil mixtures in spiked exposures, as well as 2-methyl-naphthalene and total naphthalene in continuous exposures.  For each of the different test treatments, there is a high degree of overlap among the different test species and phyla.  This is consistent with the comparisons among larger data sets that have included both Arctic and temperate species (Figures 6-2 and 6-3).

While regionally specific toxicity data are ideal, the practical challenges of testing Arctic species in standard laboratory tests provide incentive to determine if previous research on a broader array of species from different regions can be extrapolated to Arctic species. Some studies have attempted to answer the question whether the Arctic species are more or less sensitive to oil components than the temperate species at the individual level: using bivalves (Baussant et al. 2009), fish (Skadsheim et al. 2009, Christiansen et al. 1996; Ingebritsen et al. 2000), decapods (Perkins et al. 2005), copepods (Hansen et al. 2011; Jensen et al. 2008; Jensen and Carroll 2010; Hjorth and Nielsen 2011; Grenvald et al. 2013; Word and Gardiner, in preparation). Interestingly, Hansen et al. (2011) found that lipid rich individuals C. glacialis survived longer than the lipid-poor C. finmarchicus individuals exposed to crude oil highlighting that lipids which are crucial to most arctic species can influence the results of toxicity tests. Furthermore, Christiansen et al. (1996) and Ingebritsen et al. (2000) revealed that the cold water adapted kidney of the polar cod (the kidney is aglomerular to retain the antifreeze biomolecule in the blood) may prevent excretion of contaminants via the urine. Although the specific physiological cold water adaptation may render the B. saida more susceptible to contaminants, there is no evidence that this fish is more vulnerable than other fish.

Olsen et al. (2011) ran acute toxicity tests with Arctic and temperate species with a single PAH (2-methyl naphthalene) and developed species sensitivity distributions (SSD) which could be compared statistically. This study indicated that median estimates for the hazardous concentrations affecting 5 and 50 percent of the species (HC5 and HC50) based on both the NOEC and LC50 estimates were less than a factor 2 higher for temperate species than for Arctic species and were not statistically different. The authors concluded that there was no regional differences in tolerance to 2-methyl naphthalene either at the species level (LC50 and NOEC) or at the aggregated species level (HC5 and HC50).  Further they conclude that the values of survival metrics established for temperate regions are transferrable to the Arctic.  These findings are supported by Word and Gardiner (in prep) who compare the relative sensitivity of Arctic and non-Arctic species using measured and literature data. They come to a similar conclusion for parent naphthalene, WAF, and CEWAF in spiked exposures (see Figures 6-2 and 6-3). 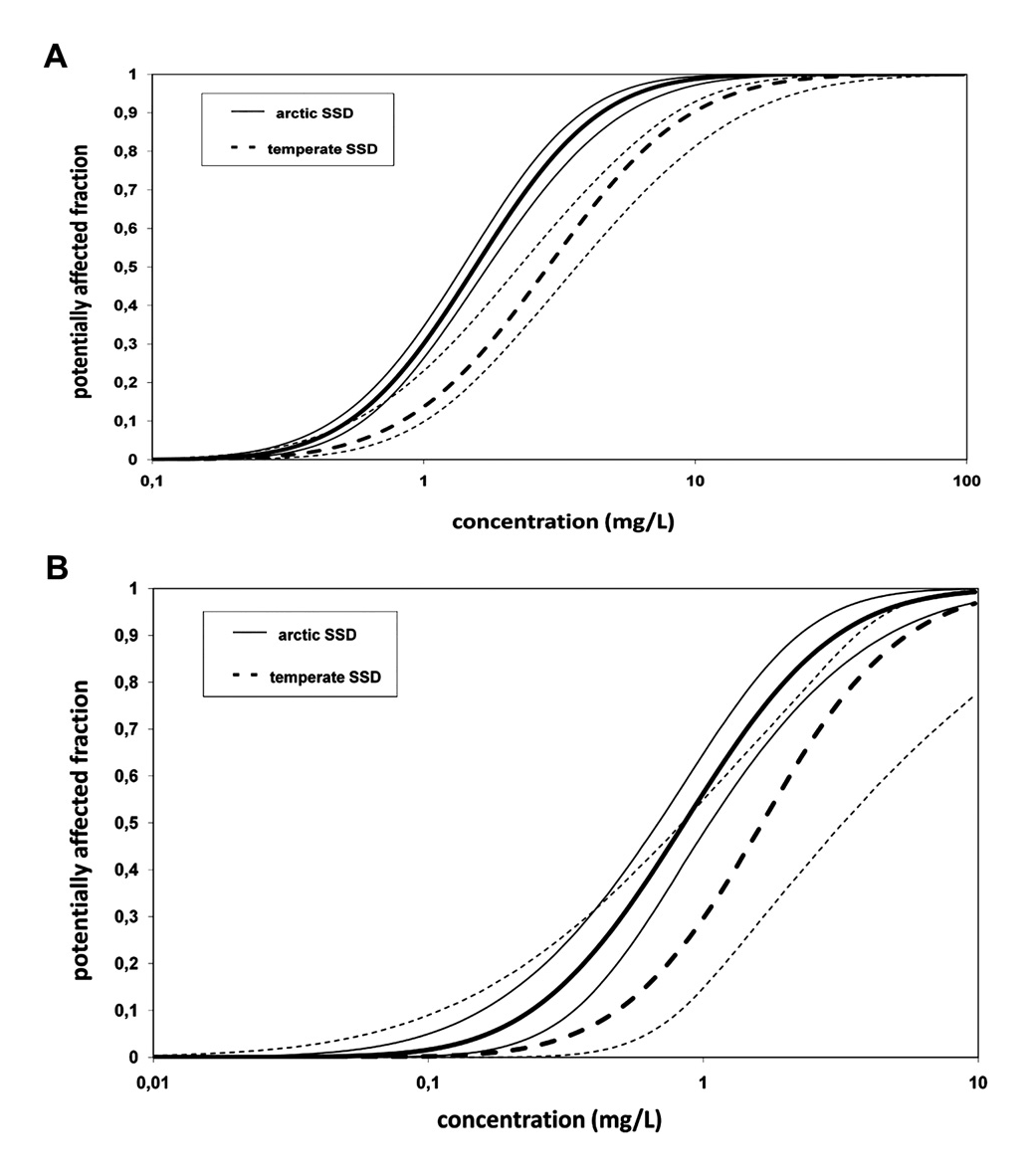 Figure 6-2. Species-sensitivity distribution curves comparing the relative sensitivity for Arctic (solid line) and temperate (dashed line) species to for 2-methylnaphthalene based on (A) LC50s, and (B) No effect concentrations. 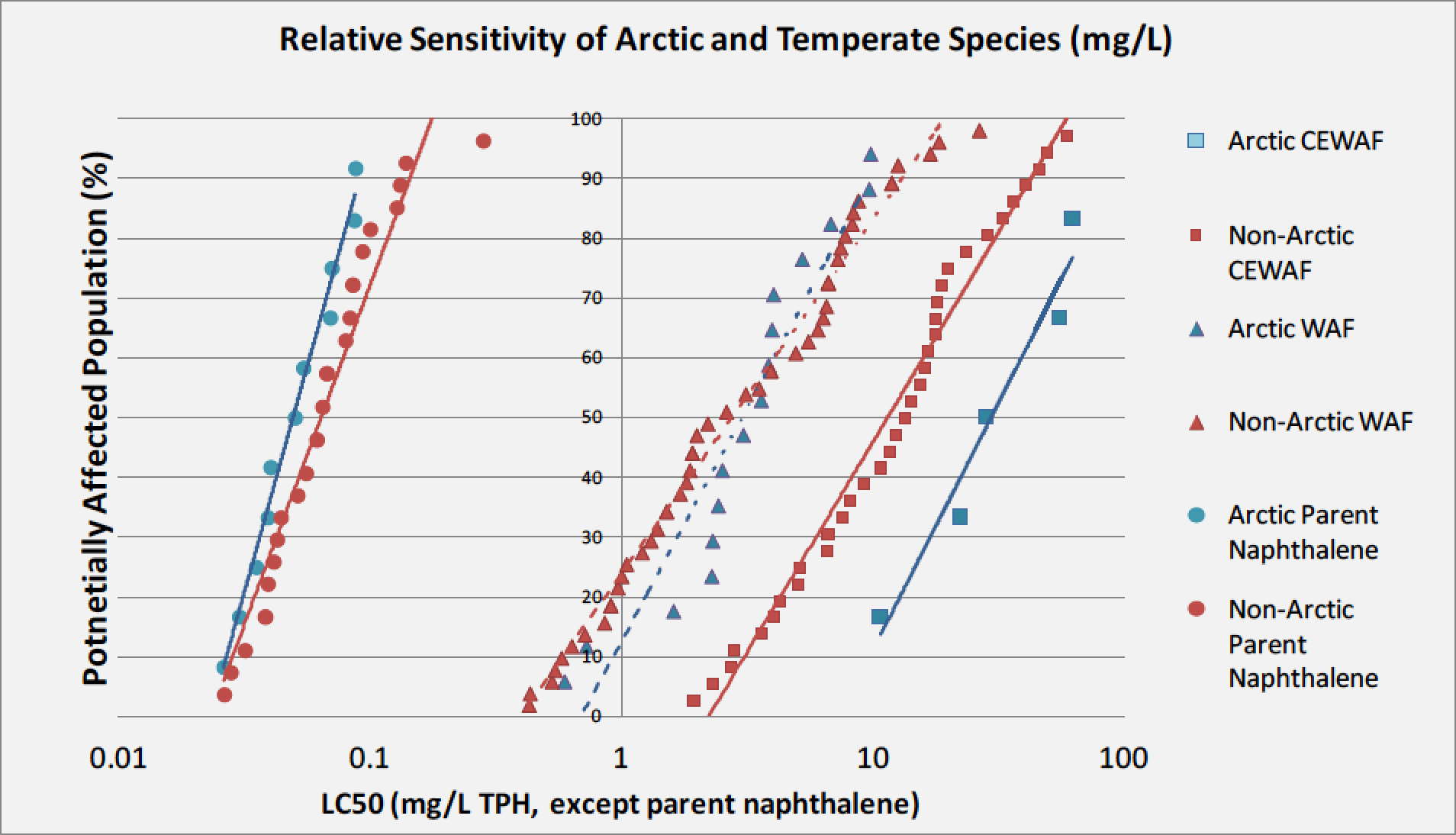 Figure 6-3. The relative sensitivity of arctic and temperate species to naphthalene, WAF, and CEWAF exposures (Word and Gardiner, in prep)

A third study by DeHoop et al. (2011) also used the SSD approach to evaluate the relative sensitivity of naphthalene, 2-methylnaphthalene, and crude oil across data sets from a variety of literature sources.  The results support the general conclusion of Olsen et al. (2011) that values of survival metrics for temperate regions are transferrable to the Arctic for the chemical 2-methyl naphthalene, naphthalene, and physically and chemically dispersed crude oil as long as extrapolation techniques are properly applied and uncertainties are taken into consideration.

In assignment of risk for regulatory purposes, it is assumed that if species at the individual level are protected then higher levels of biological organizations (e.g. populations, communities, and ecosystems) will also be protected.  This implies that if there are similarities in the sensitivity of temperate and Arctic species, then they will be similarly sensitive at the population or community level.  However, a mesocosm study at the community level (Olsen 2007a) demonstrated that Arctic benthic communities may respond to oil-related compounds differently than temperate communities. Indeed, by measuring respiration, community structure and sediment characteristics as response variables of sediment community exposed to crude oil no effects could be observed with the temperate benthic communities as opposed to the Arctic sediment community. The authors highlighted that the effects were mainly due to differences in community structure and functioning between the two ecosystems.  Although the potential influences of a non-pristine temperate community could not be ruled out.  This study highlights the need to properly extrapolate from individual test models to population level for a proper environmental consequences analysis (ECA).

There has been a considerable effort in the past five to ten years to better understand the sensitivity of Arctic species to oil and treated oil, with nearly half of the identified studies published in the last five years.  Most of the recent studies provide relatively good information for risk assessment and biomonitoring, especially for the pelagic ecosystem and for assessing the toxicity of chemically or physically dispersed oil.

The copepod dataset is among the most complete for Arctic species, particularly for acute lethality.  Current data exist for oil-water dispersions, dispersed oil, ISB residuals, and single compounds.  There are similar data evaluating oil and chemically dispersed oil for pelagic fish, particularly Arctic cod (B. saida) and Atlantic cod (G. morhua).  For acute-lethal endpoints, data sets could be expanded with qualified data from boreal or temperate data sets.  There is also an emerging dataset regarding sublethal endpoints for copepods and cod; however, this dataset is still limited.  Other pelagic VECs that have little or no data (e.g. capelin, hyperiid amphipods, C. hyperboreus, and Arctogadus glacialis) as well as other types of petroleum hydrocarbons (e.g. ISB residuals) should be a focus of future efforts.

Ice communities are a unique component of the Arctic and their ecology has been a focus over the past decade.  Recent toxicity studies have dramatically increased our understanding of effects of oil and dispersed oil on ice amphipods, an important component of the ice community.  These acute toxicity data are suitable for use in evaluating the effects of oil in ice.  However, additional work is necessary to better understand effects and exposures of oil and treated oil in and near sea ice and sublethal effects.

There is a substantial amount of data on the effects of oil and treated oil on temperate benthic communities; however few data exist for Arctic species.  Based on the study by Olsen et al. (2011) some data on temperate species may be applicable for Arctic species however, the data supporting this conclusion are limited.  Further evaluations with other single PAHs, oil and treated oil for targeted species designed to strengthen this conclusion will dramatically improve the available data for benthic intertidal and subtidal communities.