0.2 Priority Recommendations to Enhance NEBA Applications in the Arctic

The review of Arctic literature found many high quality assessments at the laboratory, mesocosm, and field scales on the efficacy of the treatment options (natural recovery; containment and product recovery; use of chemical dispersants or OMA; and in-situ burning). These studies provide information for efficacy estimates and for application to transport models providing good estimates of the movement of residuals from one EC to another within the Arctic. There are also high quality toxicological effect and biodegradation studies conducted under Arctic conditions that indicate the relative acute sensitivity of Arctic species are equivalent to sub-Arctic, temperate and tropical species and that biodegradation of oil by indigenous Arctic microbes is efficient and more rapid than anticipated based on the cold inclement conditions in the Arctic. The priority recommendations of each workgroup are included at the end of each section. A list of the high priority work elements within each section is appended to the summary of recommendations. Several of the recommendations apply to local operations and should be incorporated in baseline monitoring programs, Environmental Impact Assessments and operational oil spill response plans. These recommendations have not been prioritized here, but should be considered by the individual operators.

Four overarching areas of research were identified and were considered by the scientific panel of experts to be of the highest priority to advancing NEBA applications in the Arctic:

All response actions, including natural recovery, result in adverse effects on some portion of the environment and to some species. The consequences of those actions need to be compared holistically among all ECs and VECs. Direct ecotoxicological responses to the oil spill residuals is an important aspect of these considerations but the long term recovery potential of the ECs and VECs is even more important. The relationships between EC resilience and the sensitivity and resilience of VECs within those ECs is an important area that needs to be addressed in OSR consequence analysis. A way to consistently summarize and present available data on the impacts of oil spill response techniques on selected VECs within ECs would be through the development of information matrices that collate the relevant available data to support Arctic NEBA processes. These ARCATs (Arctic response consequence analysis tables) summarize the relevant information from literature to focus on the initial and long term consequences of oil spill response actions so that impacts to ECs and VECs that are less resilient and which take the longest time to recover are avoided. To accomplish that goal a number of tasks are suggested. 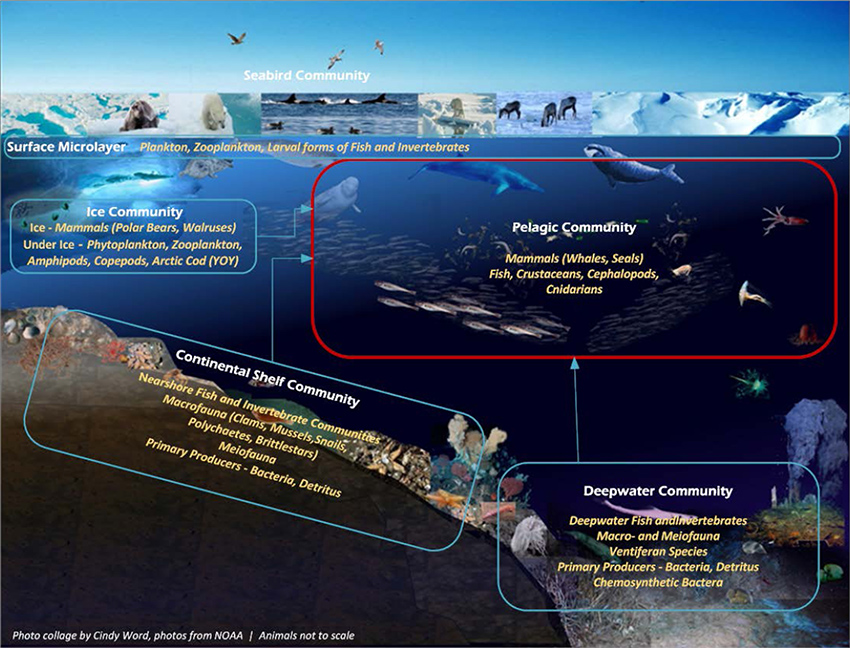 Biodegradation of fresh and chemically dispersed oil using indigenous organisms from pelagic Arctic environments has been demonstrated to occur at rates similar to those observed in deep and surface waters throughout the marine environment. Biodegradation of oil and OSR residuals when they are concentrated at interfaces (e.g. air/water and ice/water) is less well understood but assumed to be slower based on the reduction in surface area of the oil when it is re-concentrated in these convergence zones. The recommended areas of research for these areas are:

0.2.4 Modeling of Acute and Chronic Population Effects of Exposure to OSRs

Key attributes to determining the importance of acute and chronic responses of organisms to OSR residuals are measures of the natural resiliency of individuals, populations of species, and structure of food webs. Modeling of the transport, fate and effects of oil spills is relatively well known and predictable. Toxicity at interface environments is much higher due to the concentration of contaminants at these locations but the population influence of that concentrated contaminant exposure is less well understood. The areas of research suggested to provide improvement in the understanding of population impacts to VEC from exposure to OSR, especially at these interface habitats is provide in the following:

Each review team arrived at similar overall conclusions. They observed that there were high quality assessments on the efficacy of various response options. Those assessments were conducted under different physical conditions representing the Arctic at laboratory, mesocosm, and field scales. It was also generally recognized that strong transport models exist and are applicable to some Arctic conditions, including broken ice but some necessary adjustments to include information on currents, and transport under multi-year and annual ice conditions may be required. However, past estimations of the effects of various response actions have been generally isolated to a single environmental compartment or species based on acute toxicity responses using pelagic species or age classes. These response data have been used to predict ecosystem level effects in different habitats by modeling the concentrations of oil as it moves through the environment and interacts with new species or age classes. Although the research on the acute effects is generally well done, the long term consequences to different environmental compartments and species has not been well developed. This includes chronic toxicity responses but more importantly the overarching physical and chemical resiliency of environmental compartments and the biological recovery potential for species or age classes living in those compartments that are exposed to weathered and treated or untreated oil. Resiliency of environmental compartments and population to oil exposure is less well known not only in the Arctic but also non-Arctic environments. These longer term factors in recovery are key components needed to provide a better balance to evaluations of the consequences of oil spills and use of alternative treatment options.